Anyone who has read this blog in the past couple of years knows that Crohn’s disease has been a major part of my 12-year marriage to Bruce (he was diagnosed in December 1998, just before our first anniversary). (Click “Crohn’s disease” in the category cloud at left to read some of the archived posts.)

Bruce has had three flare-ups in the past 11 years, the most recent of which started three years ago and lingers still.

Crohn’s has taken Bruce’s job, a lot of our money and a good deal of our energy (I never thought I would be this tired at 47!).

With a disease like Crohn’s, you feel helpless much of the time. Its cause is a mystery, its cure nonexistent. Today.

Tomorrow, we will find a cure.

Today, we are working toward that cure, not as scientists but as advocates – for education, awareness and research.

Because, in some things, we are not helpless. We have choices. We can decide.

I have decided to fight.

I don’t make New Year’s resolutions, but I made myself a goal for 2010. This year, I’ve committed to helping bring to Arkansas a chapter of the Crohn’s & Colitis Foundation of America.

The nearest CCFA chapters are in Dallas, Tulsa, St. Louis, Nashville and New Orleans. A little too far to drive, if you ask me.

CCFA is dedicated to finding a cure for Crohn’s disease and ulcerative colitis, collectively known as inflammatory bowel disease (IBD), and “to improve the quality of life of children and adults affected by these diseases.” Read more about CCFA’s mission here.

It is one thing when your 39-year-old husband is diagnosed with such a devastating disease. It is another when your cousin’s 10-year-old son is given the same diagnosis.

Ten percent of the more than 1 million Crohn’s sufferers in the United States are children, including my young cousin, Spencer. He was diagnosed last summer. He’s 11 now, and his little brain has had a lot to absorb in the past several months.

Spencer has probably done more research on Crohn’s than many adults have. He’s super-smart and ultra-aware. He knows stuff that an 11-year-old boy shouldn’t have to know about himself and his body. Not yet.

But maybe Spencer will be the guy to find the cure someday.

Meanwhile, he’s part of the movement to bring a CCFA chapter to Arkansas.

On Saturday, May 15, at 5 p.m., we will walk for Crohn’s and colitis. Read more here about the Little Rock Take Steps Walk. It will be a casual stroll (less than a mile) in a family-friendly, festival-type atmosphere.

To join Team Taylor Trotters (Taylor is the maiden name of Spencer’s mom, her sister and me) or to donate, click here. Our team goal is $5,000. Every donation of $5, $10 or more will help us reach our goal.

To all of my cousins, aunts, uncles, nieces, sibling, future sibling-in-law and friends around Arkansas: April or I will be contacting you to walk with us, but feel free to post a comment below (or click the above link and join) if you’re ready to get on board now! (And if you are a designer, we need help with a T-shirt design. We’ll have Team Taylor T-shirts, but we haven’t gotten that far yet. We’ve been busy working on tomorrow’s Walk kickoff party in Little Rock.)

2010 is the year that Arkansas will establish its very own chapter of CCFA. Be a part of it! 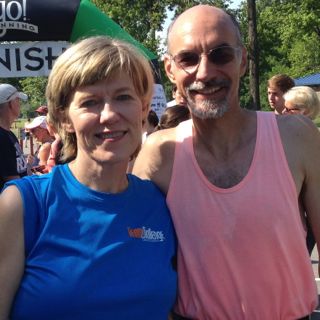